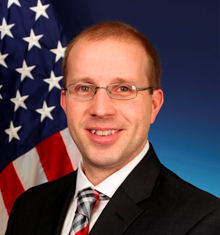 Roy (Troy) H. Olsson III joined DARPA as a program manager in June 2014.  At DARPA he serves as the program manager for the Near Zero Power RF and Sensor Operations (N-ZERO) program, which seeks to develop RF and physical sensors that process and detect infrequent but time critical event signatures passively, thus enabling off but alert sensors with years of lifetime from a coin cell battery.  Troy is also the program manager for the Vanishing Programmable Resources (VAPR), Signal Processing at RF (SPAR), A Mechanically Based Antenna (AMEBA), Arrays at Commercial Timescales (ACT) and Inbound, Controlled, Air-Releasable, Unrecoverable Systems (ICARUS) programs.
Troy received B.S. degrees in electrical engineering and in computer engineering from West Virginia University and the MS and Ph.D. degrees in electrical engineering from the University of Michigan, Ann Arbor.  From 2004 to 2014, he was a Principal Electronics Engineer in the MEMS Technologies Department at Sandia National Laboratories in Albuquerque, NM.  At Sandia, Troy led research programs in the area of miniature piezoelectric filters and oscillators for small, high performance RF systems.  He has authored more than 100 technical journal and conference papers and holds 23 patents in the areas of microelectronics and microelectromechanical systems (MEMS). Together with the Sandia Microresonator Research Team, he was awarded an R&D100 award in 2011 for his work on Microresonator Filters and Frequency References.